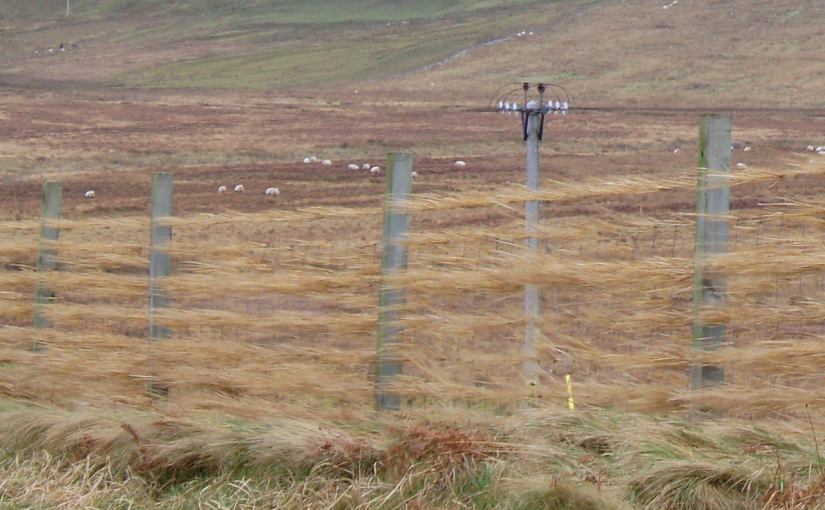 Just sharing my passion for the wind today and a quick snapshot of the effects of the wind whipping up the dead grasses, flinging them against the wire fencing. Where they catch the wire they wave frantically, a real joy to watch. Ah the simple things in life.

With a constant wind speed of F7 to F8 which is between 32-46 mile per hour (51-75 km/h) and gusts coming thick and fast as strong as F9, it really is not too bad out there. I can just about make out the sea in the greyness. If it wasn’t for the white horses galloping across its turbulent surface, I wouldn’t know the sea was even out there. Still it is a much nicer wind than in the winter months, then it comes in with such ferocity and an almost violent edge, you can feel the damage that could occur as it hits hard anything in its path. It comes with a bite too, a sharp maddening bite that reaches to your core.

Today though, it is powerful, in a gentler way. Softly pushing you over, almost playfully, rather than just flattening you. The Spring winds. There is a softened, almost rounded edge to it too and a tinge of warmth, a hint that the winter may actually be over with for this year.

I love the wind, Spring Summer Autumn Winter, no matter what the season. Each has its own personality, a general behavioural pattern, even though each time it revisits it has a slightly different edge on its return.

You won’t catch me out though. I can read you loud and clear and I still love you no matter how you show up.

One thought on “Forces of Nature – The Wild Wind”